Out of gas: renewable heating 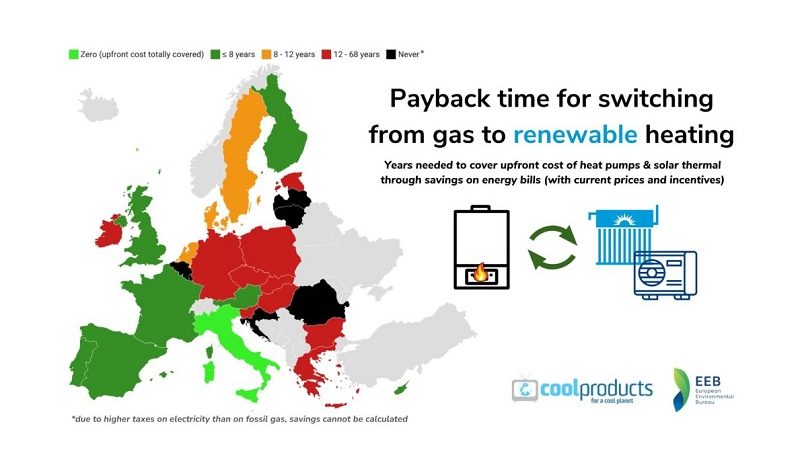 Out of gas: renewable heating affordable for all in EU. The answer to soaring gas prices lies in renewable heating, a technology that is ready to replace gas boilers but only affordable in 8 EU countries. To enable consumers to overcome the upfront cost for switching to clean heating, EU governments will need to increase subsidies by €70 billion, a new Coolproducts study reveals.

The switch from gas boilers to renewable heating solutions is still out of reach for many European households.
Households willing to install renewable-sourced heating face a common problem. In general, the upfront cost of installing a heat pump is much higher than a gas boiler, but heat pumps are three times more energy efficient. After some years, the upfront cost of a new heat pump can be offset by savings on energy bills – but significant investment is needed at first.

To measure the affordability of switching to heat pumps and solar thermal, we must look at the period needed to cover their upfront cost through the savings on energy bills, which is known as the “payback time”.

With the existing incentives and prices, an average middle-income family of four members will only find a reasonable payback time (8 years or less) when switching from a fossil fuel boiler to a heat pump in Italy, Portugal, Spain, Finland, Cyprus, Malta, Austria and France.

Simply put, 19 out of 27 EU countries either don’t allocate enough subsidies for families to overcome the upfront price of renewable heating solutions or have disproportionate tax regimes on electricity. A lack of public support is hampering the uptake of heat pumps and solar thermal in Europe.

However, solving this problem would be more feasible than ever for EU governments
To make heat pumps affordable for everyone, member states must increase subsidies by at least €70 billion, an extra mile that could be reduced to €20 billion if a CO2 tax of 100 €/ton was introduced (either with the proposed dedicated ETS scheme or alternatively through the Energy Taxation Directive). Such are the estimations of the latest study carried out by the European Environmental Bureau (EEB) on behalf of the Coolproducts campaign.
– Read here the factsheet report for each EU country and the UK
– Here is the full report if you want to have a deeper reading

Green heat for all
Only about 17.3% of the heating appliances installed in European homes are powered by electricity or use clean technologies.
Time is running out to push gas out of a sector that is responsible for 12% of the EU’s total CO2 emissions, equivalent to the emissions of all the cars in the EU, and 28% of the EU’s annual energy consumption.
The non-emitting technologies, able to replace gas, oil and coal boilers, have been there for years and manufacturers have manifested on several times to be ready for the switch.

The only missing piece in this transition towards clean heating is political will. Firstly, we must ban the sale of gas boilers by 2025, which is imperative for achieving climate neutrality by 2050, as the International Energy Agency (IEA) recommended. Secondly, we need to make the switch to renewable heating affordable for all, which would require an extra effort of €70 billion in subsidies.
Fortunately, the combined effect of the national allocation of recovery and resilience plans together with revenues from carbon pricing could allow governments to cover a great part of the extra effort needed to finance the upfront cost of heat pumps.

Still, our analysis also shows that 20 out of 27 EU governments pay millions of euros in subsidies to have new gas boilers installed in our homes, despite evidence that this is slowing down the uptake of renewable heat and undermining Europe’s 2030 climate goals.
Heat pumps with low-GWP refrigerants and solar-thermal technologies have proven to be a very effective, already available solution to slash emissions, but also to protect citizens from our dependency on gas and its volatile prices. These electricity-powered devices can play a major role in reducing energy poverty as solar and wind power are now cheaper than fossil fuels and do not suffer from market-related problems.

While our analysis focuses on average-income households, additional social measures will have to be taken in order to eliminate barriers to clean heat for low-income households. The proposed Social Climate Fund of the Fit For 55, carbon pricing revenues and further energy poverty programmes must be addressed in order to make the purchase of renewable technologies feasible and the running cost compatible with everyone’s income.

Key facts and figures
– The rough cost estimate for making the replacement of all gas and oil boilers with heat pumps or solar-thermal boilers affordable for all (considering a typical investment of €10k) is €70Bn in the EU.
– This would go down to €20Bn if a CO2 tax of €100 would be in place.
– Ground source heat pumps working on the national electricity mix are the least emitting heating technologies in all member states.
– Air to water heat pumps have lower emissions than gas boilers in all member states except Poland and Estonia, due to the high share of coal in the power sectors of these two states.
– Only in 8 EU countries payback time for heat pumps is acceptable (< 8years) with existing incentives and energy prices.
– If a CO2 tax of €100 is introduced (in some form) heat pumps would have an acceptable payback time in 12 instead of 8 member states
– Southern EU countries (Cyprus, Malta, Portugal and Spain) have shorter payback times as their clean heating technology mix, air-to-air heat pumps combined with solar thermal, is less expensive than an air-to-water or a ground source heat pumps.

Davide Sabbadin, a Policy Officer at the European Environmental Bureau (EEB), said: “Households in Europe are not all equal, at least when it comes to breaking free from fossil gas. Member states and EU institutions must beef up their dedicated funds to overcome upfront costs and set a regulatory framework that eases renewables in the heating market, because carbon pricing alone cannot do the job. Not only can these policies slash emissions massively, but they can also end our dependence on gas and protect citizens from its volatile prices”

Mélissa Zill, Programme Manager for heating at ECOS, said: “The pouring of public funds into polluting technologies must stop. We must stop selling gas and oil boilers as of 2025. Governments must help everyone to make the switch, leaving no one behind. With gas prices soaring and recovery funds being allocated, EU member states stand before a unique window of opportunity.”

The EEB is Europe’s largest network of environmental organisations with over 140 members in 30 countries. ECOS is the only European NGO focusing on environmental standards.