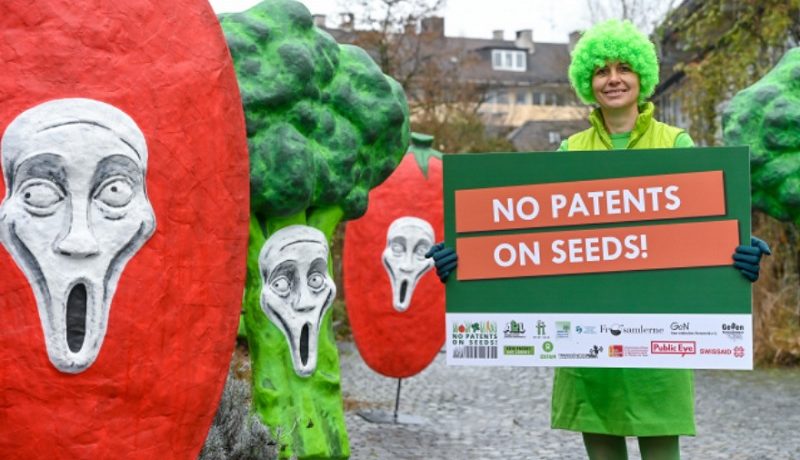 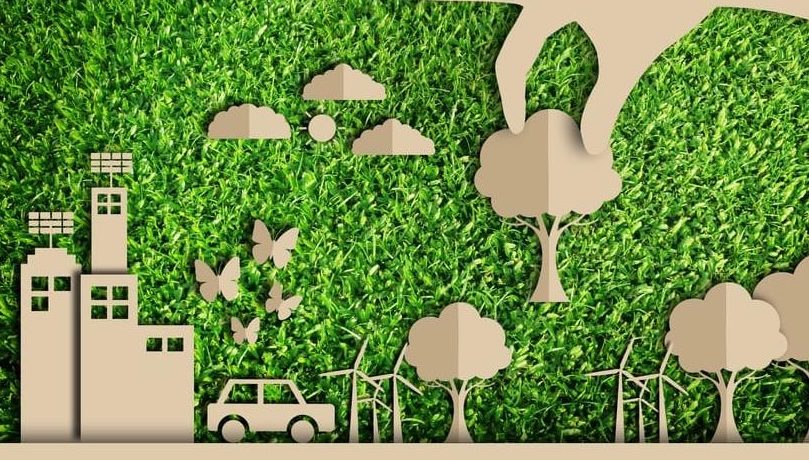 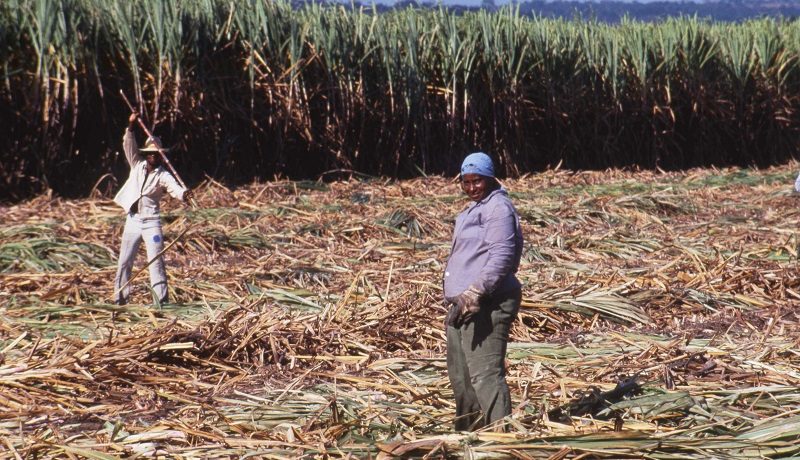 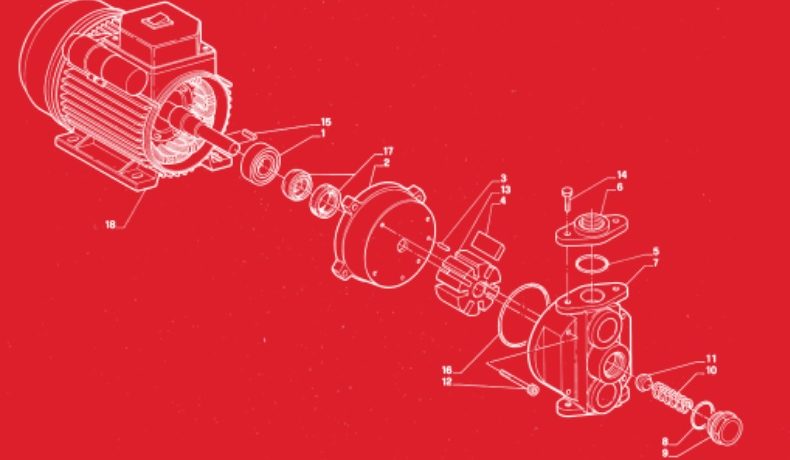 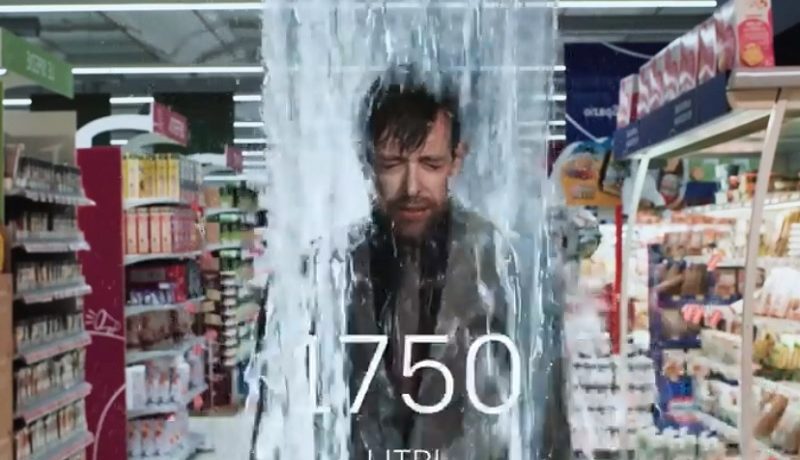 Irresponsible antimicrobial use in meat 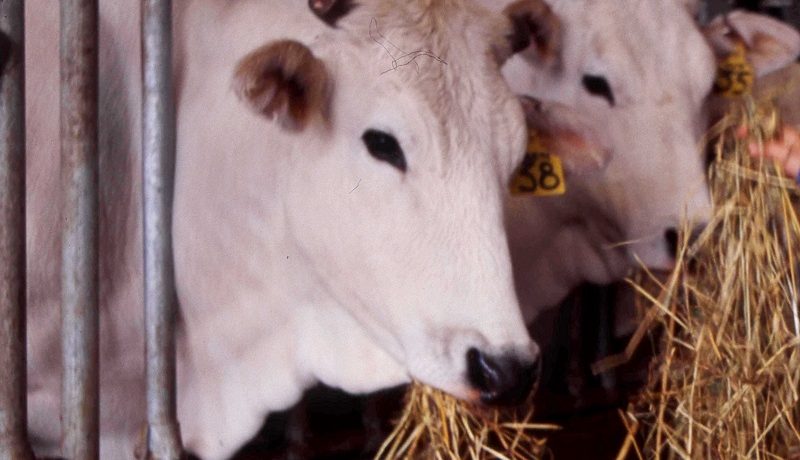 Irresponsible antimicrobial use in meat supply chains, threatening public health. A study of the ten largest animal health companies by the $38 trillion-backed FAIRR Initiative finds that none of ten leading animal health companies including Elanco, Phibro and Zoetis have adopted a comprehensive policy for tackling antimicrobial resistance (AMR) that is consistent across markets and supports improved supply chain transparency, manufacturing standards, responsible marketing and use of antimicrobials in animal agriculture.

FAIRR’s research examines the $47 billion animal health industry which manufactures and sells antimicrobial treatments for the animal agriculture sector, that supplies supermarkets and restaurants with meat products. It criticises the sector for a lack of transparency from factories to sales to farm-use, and finds that current sales and marketing practices are fueling irresponsible antimicrobial use in animal protein supply chains.

Antimicrobial Resistance (AMR) is the emergence of superbugs (bacteria, viruses, fungi and parasites) that are resistant to antibiotics. An AMR crisis threatens to make even routine operations like hip replacements or caesarian sections life-threatening because we may no longer have effective antibiotics available. In 2018, an estimated half a million people worldwide fell ill with a form of tuberculosis that became resistant to one of its most effective drug treatments, Rifampicin.

The growing threat of AMR is largely due to the inappropriate overuse of antimicrobials, the majority of which are currently used in livestock farming to compensate for poor living conditions where disease outbreaks are difficult to control. Currently, an estimated 70% of global antimicrobial use occurs in animal agriculture.

Antimicrobial-resistant bacteria originating in animals can be transmitted to humans through the environment, food products, or direct contact – making antibiotics stewardship in food supply chains an absolute necessity and an urgent human health issue.

Marketing matters
Of the ten companies analysed by FAIRR, none has a policy on responsibly marketing antimicrobials for use in animal agriculture.
Product labelling has a significant influence on how farmers administer antibiotics to their animals. In particular, by labelling products for ‘growth promotion’ and ‘routine prophylaxis’ animal health companies are propagating the misuse of these critical drugs.

Moreover, in emerging markets, product labels can be farmers’ only guide to correct usage, dosage, method of application, and expiry date as they often lack access to veterinarians. Use for prophylaxis can account for as much as 84% of total antibiotic use in animal agriculture in areas such as the Mekong Delta region of Vietnam[vii], while in China, use for growth promotion accounted for an estimated 53% of total usage of antibiotics in food producing animals in 2018.

For example:
– 2019, US animal health firm Zoetis announced that it would remove growth promotion messaging from products containing medically important antibiotics. However, the report cites evidence that the company does still label some products for growth promotion in at least one country in Latin America.
– Zydus Cadila, an animal health firm based in India, sells a product called Winmyco, which contains a highest-priority critically important antibiotic for human health, Tylosin. The product is being promoted for growth purposes in India, despite a severe threat of AMR in humans as a result of its overuse.

Without a consistent global approach to labeling, marketing, product sizing, animal health companies’ practices are driving a widespread use of antimicrobials in meat supply chains that comes at a potentially deadly cost to human health.

Environmental risks
The study also highlights that waste from the manufacture of antimicrobials is polluting environments and increasing the risk of antibiotic-resistant genes spreading to humans through waterways and soils. A recent study found that at least two thirds of the world’s waterways contain unsafe levels of antibiotics[ix]. For example, the Danube in Austria has been found to have four times the safe levels of antibiotics, while in Bangladesh concentration levels have been found at 300 times safe levels.

Current animal health manufacturing practices set few or no restrictions on concentrations of antimicrobials discharged in waste streams. At the recent G7 meeting on AMR, global health ministers specifically called on the urgent need to address the manufacturing industry’s waste management practices and their potential contribution to the proliferation of AMR.

Lobbying on the rise
Multi-lateral commitments, national regulations and detailed labelling on antibiotics have made some progress, but these measures have been matched by a notable increase in lobbying expenditure. In the EU and US alone, spending has nearly doubled from 2015-2019. FAIRR was unable to track lobbying spend in emerging markets but found evidence that some companies may be lobbying against strengthened regulation, putting lives at risk.

Risky business: ionophores
The study finds that a lack of regulation is leading to the wide use of ‘ionophores’ which can contribute to AMR. Ionophores are antimicrobials that are classed as antibiotics by the US FDA but not by the EU. This means that some meat classed as ‘raised without antibiotics’ (RWA) can include ionophores, potentially undermining global attempts to tackle AMR.

The use of medically important antibiotics in UK poultry farming dropped by 80% from 2012 to 2017, but the use of ionophores grew by 30%. In fact, in 2020, animal health giant Elanco reported that 85% of its revenue from animal-only antimicrobials came from ionophore sales.

There is evidence that ionophores could be important in human medicine against widely resistant bacteria, and so they must be administered responsibly to reduce the risk of AMR. In addition, their environmental toxicity raises concerns about residues in food and the environment — impacting humans, wildlife, soil and aquatic organisms.

FAIRR’s research offers a roadmap for animal health companies and their investors to reduce AMR risk. The study finds that five of the ten companies assessed already have a ‘high exposure’ to alternative treatment options and many forward-thinking animal health companies are already reducing their exposure to antibiotics by diversifying into alternatives such as diagnostic tools, vaccines, and novel treatments. Investors are invited to participate in FAIRR’s upcoming formal engagement with the sector to ask for robust action on AMR.

Jeremy Coller, Chair of FAIRR and CIO of Coller Capital said: “Antibiotic overuse is a pandemic accelerator hidden in plain sight. An estimated 70% of antibiotics are used in farmed animals, so both Pharma and farmer have a responsibility to reduce antibiotics in meat supply chains. But the animal health sector is failing to live up to its responsibilities to manage the risks we all face from antibiotic resistance. We have to ask ourselves: can the antibiotic crisis be solved without the cooperation of the $47bn animal health sector? Since 2016, over 70 investors worth $5.5 trillion have successfully engaged with global restaurant chains to limit the use of antibiotics in their global supply chains. Now FAIRR is looking beyond restaurants to look directly at the animal pharma sector and its role in AMR. It’s absolutely necessary for animal pharma to improve its antibiotics stewardship. FAIRR has invited investors to participate in its upcoming formal engagement with these companies to ask for robust action on antibiotic investment risk.”

Prof. Dr. Thomas Van Boeckel, ETH Zürich said: “The expanding use of antimicrobials in livestock, a consequence of growing global demand for animal protein, is of serious concern in light of the threat of antimicrobial resistance. An effective policy response including restrictive regulations on antimicrobial use and user fees could reduce the use of antimicrobials in food animals by up to 60% by 2030 compared with a business-as-usual target (BAU) of continued growth of the livestock sector. But currently, a lack of transparency or consistent global regulation is standing in the way of improved antibiotic stewardship in our food system. Any effort to safeguard against AMR will require the cooperation of policymakers, investors, farmers and animal health firms around the globe – as well as profound changes in hygiene standards and medication for intensively farmed animals.“

Professor Dame Sally Davies, UK Special Envoy on AMR, said: “Effective antibiotics are a critical infrastructure for health systems and food systems – and both are connected. Yet the system for marketing antibiotics is broken, risking the irreversible rise of the AMR pandemic, with knock-on effects for poverty, hunger and global security. To build forward from COVID-19 – to sustainable, effective and accessible treatments, we need innovation right across the value and supply chain. We also must address the risks posed by treating animals with antibiotics that are medically important to humans. FAIRR’s report demonstrates the opportunities for companies and consumers of ensuring that prudent antimicrobial use becomes the social and economic norm.”

Emma Berntman, Engager for EOS at Federated Hermes, said: “Our global medicine cabinet is running low. A pandemic, a lack of investment into new antibiotics and growing resistance mean we’re running out of options for treating the infections of the future. This has wide-ranging implications for sectors from farming to pharmaceuticals to food. Now is the time for leadership from investors in the fight to prevent the spread of superbugs and safeguard against a public health crisis that could cost the global economy more than a trillion dollars by 2050. We need robust investor engagement with the animal health sector on its exposure to AMR risks, policies to reduce prophylactic sales given incoming regulation and forward-looking research into alternative solutions such as vaccines and diagnostic technology. This isn’t tomorrow’s problem, it’s an urgent challenge for the financial community of today.”

About FAIRR
The FAIRR Initiative is a collaborative investor network, founded by Jeremy Coller, with a membership of $38 trillion assets under management. FAIRR works with institutional investors to define the material ESG issues linked to intensive livestock and fish farming systems and provide them with the tools necessary to integrate this information into their asset stewardship and investment decisions. This includes the Coller FAIRR Index, the world’s first comprehensive assessment of the largest global animal protein companies on environmental, social and governance issues. 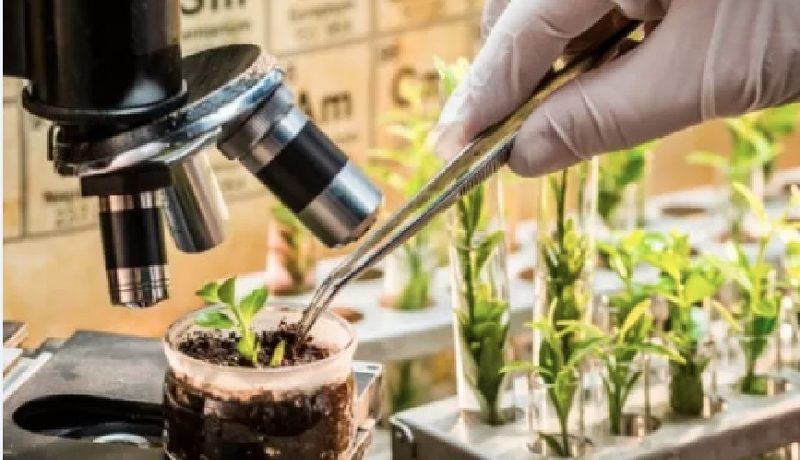 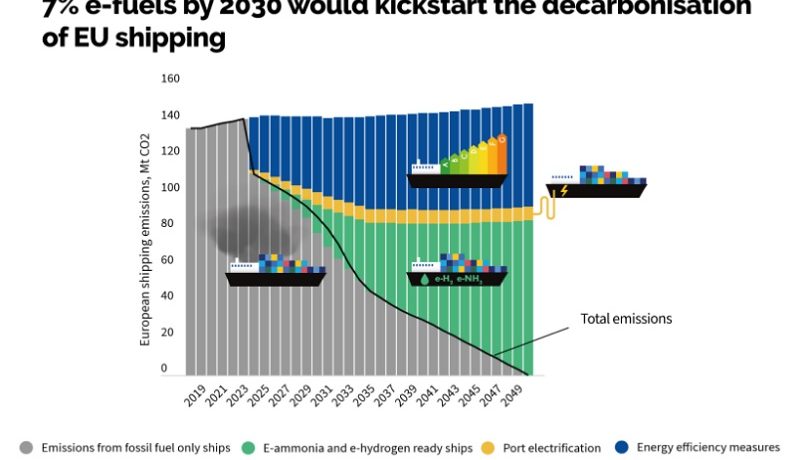 Decarbonise EU shipping. 7% of the EU’s shipping fuels need to be green by 2030 for the sector to decarbonise by mid-century [1], a new study shows. Modelling by Transport & Environment (T&E) points to a clear path which involves modest deployments of e-fuels combined with efficiency measures such as wind-assist and speed optimisation.

Faig Abbasov, shipping director at T&E, said: “If EU shipping is to play its part in rapidly cutting global emissions, it should act now. Only a combination of energy efficiency improvements and zero-emission vessels will get us there. Our analysis shows that even modest deployments this decade can put a sector resistant to change on the right track. The EU should mandate 7% electrofuel deployment by 2030 for all EU shipping as an ambitious but realistic way to fully decarbonise by 2050.”

Up to a third of emissions could be cut in 2050 through improved efficiency alone. But this will not be enough to decarbonise the sector, said T&E. If the industry is to cut emissions further it will need to transition to e-ammonia and e-hydrogen which are currently the cheapest green fuel options.

Both could reach up to 7% of the EU shipping fuel mix by 2030 which, the study shows, would give producers the kickstart they need to make enough of the fuels in the coming decades. It would take, for example, the equivalent of 120 of the largest container ships [2] to consume that amount of e-ammonia (4.6 million tonnes).
For comparison, the equivalent of at least 130 new natural gas-powered vessels of the same capacity will be deployed in the next three years alone.
The EU should mandate 7% e-fuels by 2030 as part of the forthcoming FuelEU maritime legislation, said T&E. 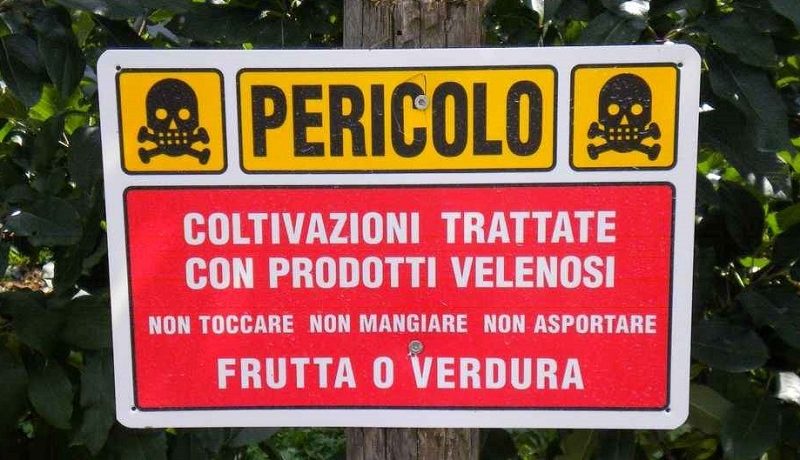